Originally planted in 1859 by New England sea captain William Peterson, the Bergfeld vineyard is one of the oldest vineyards in the Napa Valley. Situated on the St. Helena valley floor, the vineyard borders a number of older homes in the town. By late 2013, the vineyard was experiencing wastewater pond performance issues and complaints from neighbors were becoming more consistent.

Locals complained of a “rotten egg” odor emanating from the pond. Others focused on the loudness of the aging paddlewheel aerators running 24/7, despite each being fitted with a baffle to dampen the sound.

Encouraged by California’s Energy Rebate Program, the winery seized on the opportunity to upgrade its pond aerators with a more energy-efficient solution and, in the process, be a better neighbor and improve the pond performance in recycling the winery’s wastewater for irrigation.

Pacific Gas & Electric’s (PG&E) Wine Industry Efficiency Solutions Program (WIES) consultant introduced the winery to ClearBlu Environmental, a manufacturer of wastewater systems that had worked with a number of wineries previously to earn a rebate from the utility by reducing their energy consumption.

“Winery wastewater is difficult to treat because it is high in organic loading, low in nitrogen, low in phosphorus, and extremely acidic,” said Robert Bixby, founder and CEO of ClearBlu Environmental. “We’ve had some customers where the whole pond has gone septic because the pH dropped below 6.”

The Napa County Department of Environmental Management permits HALL St. Helena’s wastewater to have a pH no less than 6.0 and no greater than 9.0, and minimum dissolved oxygen (DO) of 2.0 mg/L. The permit does not regulate pond influent or effluent levels, but the pond’s freeboard needs to be maintained at 2′ or greater.

When a pond goes septic, it gives off a pungent odor — a critical issue not only for neighbors, but for wineries investing millions in attracting tourists to their tasting rooms. It also can’t be discharged to land application areas (LAAs) for irrigation purposes until the pH is brought under control.

Historically, the paddlewheel aerators had created an air cap on top of the pond. The top quarter of the pond would remain aerobic, with the microbes consuming oxygen to break down the yeast, grape solids, and soluble organic material from the fermentation process. The bottom three quarters of the pond would act as an anaerobic zone where the bacteria would work much slower, causing the organic sludge on the pond bed to build up much faster. This sludge would build up over time and have to be dredged every 5 to 15 years. Pumping the pond dry and dredging out the sludge was expensive, costing up to $100,000.

In their place, ClearBlu installed 16 smaller microbubble aerators. Unlike the heavy conventional pond aerators, the microbubble aerator configuration gets to areas of the pond that had previously been inaccessible and creates an aerobic pond from top to bottom. This allows for a more thorough digestion of the organic material and sludge.

“In turning the entire pond aerobic, the new aerators allow the bacteria to really eat the sludge all the way to the bottom, and help essentially dredge the pond for us,” said Valenzuela. “It’s like putting sheep out in a pasture. They essentially mow the grass for you.”

One of the critical issues for wastewater ponds at wineries is the seasonal fluctuations in biochemical oxygen demand (BOD) between harvest and non-harvest times. At Bergfeld, BOD levels can be close to 50 in the “offseason” with very light loading on the pond and no aroma issues. For nine months out of the year, it’s an easy process to manage.

However, during the harvest months of August to November, that changes dramatically. At Bergfeld, flows can increase to one million gallons a month. Napa County’s Department of Environmental Management wants the vineyard’s BOD to stay below 100 mg/L and starts raising concern when BOD levels get between 100 and 150 mg/L. “Above 150 is definitely where you start to get aromas and the pond is really sick,” said Valenzuela. “We try to keep it below 100 if possible, in the 50 to 100 range.”

Bixby explains the complexity. “As gray water, it’s an easily permitted application. Basically, you’re applying processed grape juice that’s been composted,” he said. “However, balancing pH and limiting BOD during harvest when wastewater can be coming into the treatment system at 7,000 mg/L BOD can be tricky.
“The most complex part is developing a pattern for the aerators,” said Bixby. For HALL St. Helena, the company set concrete steel posts to anchor the aerators and guide them in the pond.

ClearBlu also installed a DO control system to turn the aerators on and off in pods. The system uses a self-cleaning DO probe and controller to turn down the level of aeration in the winter when the water is colder and the ponds hold more oxygen. The system will turn off four aerators and then four more in a pattern, always maintaining the pond’s optimal oxygen level. Then, during peak harvest season, the level of aeration can be turned up between August and November. This flexibility helps to further reduce HALL St. Helena’s overall energy consumption costs.

Utilizing the existing pond, the installation took a couple of weeks. Aerator maintenance has been significantly reduced. Previously, the winery would need to bring a crane on site to lift the heavy paddlewheel aerators out of the pond for maintenance once a year. The new microbubble aerators were supplied with a service contract. ClearBlu visits Bergfeld once a month to take numbers on oxygen, BOD, influent, and effluent, and conduct maintenance as needed.

California’s renewable energy mandate is a key component of the state’s efforts to meet its ambitious climate goal: reducing greenhouse gas emissions 80 percent below 1990 levels by 2050. The state recognizes that agriculture and food processing can be incredibly energy intensive and impactful on the environment.

Upon project completion, PG&E’s WIES consultant measured the performance of the microbubble aerators against the previous paddlewheel aerators to calculate the energy savings being realized. By switching out their aerators, HALL St. Helena witnessed a reduction of their energy consumption and received a $30,000 plus rebate from PG&E, significantly offsetting the new equipment and installation costs.

Installed before last year’s harvest, HALL St. Helena is still in the process of read justing the Bergfeld wastewater pond to the new aeration system.

“You have to load the pond with bacteria,” said Valenzuela. “We were unable to do that this year so we didn’t get the cultures built up enough prior to harvest season.”

This means that the winery continues to override the DO probe system and is running all the aerators 24 hours a day to get the high sludge left over from the previous aeration solution down.

“For us right now, getting the sludge down and not having to dredge is more important than realizing the savings on energy,” said Valenzuela. He believes it will take almost 24 months to get the sludge level down to where he’d like it to be.

Valenzuela did note that the microbubble aerators are running at 58 HP less than the previous paddlewheel aerators, which is reducing the winery’s energy costs. He looks forward to the day when they can move over to the DO control system. “If we were running the DO control system probes right now, only half of the units would be running. But because we’re trying to get the sludge level down, we’re overriding the probe system to try to have the bacteria stay super happy and get it down,” he said.

The other notable result is the reduction in sound pollution. Previously, you could be 100 feet away from the wastewater pond and hear the paddlewheel aerators working 24/7. Now you can’t hear the aerators until you’re standing right next to the pond. And that has the neighbors sleeping soundly at night. 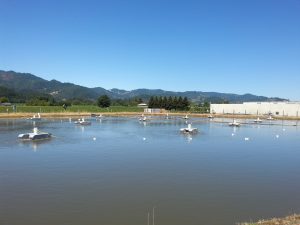