Scheid is a large custom crush and high-quality wine producer located in Greenfield, CA. They have the capacity to process up to 30,000 tons of fruit per year. Scheid has judiciously honed in their cellar practices so that they use just 1.5 gallons of water for every 1 gallon of wine produced. The industry average is about 3:1, and some wineries reach up to 12:1. Scheid’s excellent water conservation practices translate to having a concentrated waste stream. On average, their water flows reach up to 110,000 gallons per day at up to 6,400 BOD during harvest.

The facility has 3 treatment ponds at 2.36 M gallons, 2.09 M gallons, and 1.1 M gallons. They were using 105 hp of brush aerators. Scheid was unhappy with the units because they were difficult to maintain, they did not control odor, and were not providing sufficient oxygen to treat the ponds. The water quality was so poor that they were experiencing problems with the water clogging their drip irrigation system, despite having 3 large sand filters. Last year they removed 250,000 gallons of sludge from their irrigation pond. They were planning on additional dredging in the second pond when they heard about ClearBlu Environmental. 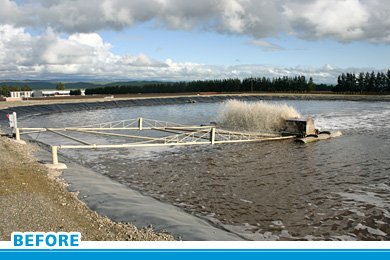 In late April 2010, ClearBlu installed 18 ultra fine bubble surface aerators. Scheid did their due diligence in researching a variety of other technologies, including looking at blower systems. They ultimately decided that ClearBlu was the best option for several reasons. The systems are very low energy, low maintenance, and have complete service agreement packages. The aerators have much higher oxygen transfer efficiency (lb O2/hp/hr) specs over other technologies, and because of the ultra fine bubbles that are created more of that oxygen is usable. The aerators have the ability to aerate to depths of 20 feet, making an entirely aerobic treatment environment. Properly oxygenated water combined with a specialized microbial treatment is the key to digestion of existing sludge and incoming BOD. 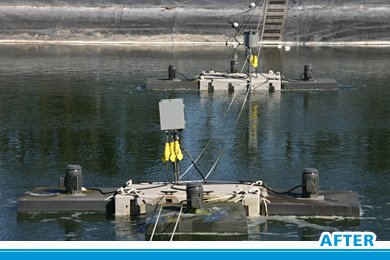 This installation reduced Scheid’s horsepower from 105 to just 54. These ultra-fine bubble aerators have many benefits, and one additional convenient advantage is their small size and low weight. Each unit and float totals only about 150 lbs. The setup was designed so that aerators could be moved easily between ponds to focus on problem areas. At the time of installation in April 2010, sludge depths in the primary pond ranged from 8″- 4′ in various locations. A recent check in August 2010 revealed depths of just 3″- 14″. In a four-month period, the ClearBlu system was able to reduce sludge by 30-40% in some areas of the treatment pond.

In addition to significant sludge reduction, Scheid is seeing significant operation cost reduction. A third party company, Base Energy, works with PG&E on rebate incentives for projects like this one. They conducted a full inspection of the site before and after installation and came back with some impressive numbers. The findings were that the new system would allow Scheid to use 326,268 kWh/yr less than with their old system. This translates to an estimated annual savings of $39,152. This reduction also made Scheid eligible for a $32,417 rebate incentive from PG&E. The rebate combined with first-year energy savings comes out to a 38% savings on the total installation cost, and the new system has a 4 year simple payback period.

Recent lab analysis of the wastewater in October 2010 shows the influent at 4,080 mg/L BOD and the effluent at just 36 mg/L BOD.