“Our city officials have always been strong partners,” says Tim Schwartz, director of brewing for Real Ale, a craft brewery in Blanco, Texas. “They allowed us to continue operations while we built a pretreatment facility. Meanwhile, we sidestreamed some high BOD items into a haul-off tank, which reduced BOD loading to 4,500 mg/L and TSS to 300 mg/L.”

ClearBlu Environmental designed the system with lift stations, screening and dewatering equipment, pH balancing and an aerated lagoon. The system, which went online in June 2013, has reduced BOD strength significantly.

Operators run three to six batches per day through the 100,000-barrel (design) brewhouse. The beer ages for three weeks in fermenter tanks before packaging. As consumer demand increases, the company adds more fermenters and equipment until the facility builds out to design capacity. “Producing a gallon of beer generates 4.5 to 5 gallons of graywater,” says Schwartz. “Near the end of 2013, we averaged 77,000 gallons per week. A year later, it hit 80,000 to 90,000 gallons per week.”

The brewhouse, fermentation cellar and packaging hall generate graywater. To establish averages for the pretreatment plant’s design, Schwartz and Kathy Towns, quality manager, sampled waste streams around the clock for a week at a time, gathering BOD loading and estimated flows. “Our lab micro-samples beer,” says Schwartz. “It can measure TSS, but BOD samples went to a local lab, which reaffirmed our TSS numbers.” Data was sent to Robert Bixby, president of ClearBlu.

A San Antonio engineering firm designed the lagoon and piping for the pretreatment system. Then local contractor Dirt Works built it at the back of the 15-acre property. Two 55- by 150-foot cells hold 238,000 gallons each. “ClearBlu asked us to partially fill the lagoon with freshwater, enabling them to set, tie off and test the aerators,” says Schwartz. The city agreed to reduce the water rate during the fill period.

Workers are upgrading the aeration system with new VaraCorp turbine aerators with an oxygen transfer efficiency of more than 4.0 pounds of oxygen per horsepower-hour.

Another contractor built and plumbed the 20-by-30-foot-long pretreatment building. When ClearBlu arrived to install the wastewater treatment components, it took two weeks. “We were heavily involved because we wanted to know what the equipment was, how it was installed and how it worked,” says Schwartz.

A turn of a valve directed the graywater from sewer discharge to pretreatment. The system has three cylindrical fiberglass lift stations (Topp Industries). The first, at the front of the property, has dual 3 hp stainless steel submersible pumps with Shredder impellers (BJM Pumps) rated at 200 degrees F. A flow failure activates a bypass to the sewer.

The first station receives influent at 100 to 110 degrees F. “However, we wanted high-temperature pumps to handle spikes caused by 200 gallons of 150- to 160-degree caustic cleaning solution,” Schwartz says. The pumps send influent 400 yards to the pretreatment building. As liquid pours over a 0.5 mm wedgewire waterfall filter, its 55-degree slope helps push grain and hops solids into a dewatering hopper. The effluent at pH 4 enters a 10,000-gallon above-ground cone-bottom settling tank.

Water flows from the top of that tank through a 4-inch pipe to an automatic system that injects sodium hydroxide to adjust the pH to neutral. A Tecweigh volumetric dry bacteria feeder (Tecnetics Industries) then introduces bacillus and pseudomonas (Roebic Labs) to accelerate aerobic digestion. Dual 1.5 hp stainless steel sump pumps (Goulds) in lift station No. 2 send inoculated effluent to the lagoon, which has gravity-fed linear cells to prevent short-circuiting and ensure a 21-day retention time.

Before effluent enters lift station No. 3 with dual 1.5 hp Goulds pumps, a flume (Plasti-Fab) with ultrasonic sensor (Hach) meters the flow. The SC200 controller (Hach) operating a butterfly valve (Hayward Flow Control) in front of the flume ensures a uniform discharge to the Blanco treatment plant. The controller’s data logger links to another controller in the pretreatment building via Modbus (Schneider Electric) to upload information.

Within two months of operation, lift station No. 1 failed. “The pump floats stuck in the off position, and two came loose when the cables broke because the material wasn’t as flexible as on standard cords,” says Schwartz. “Changing out the floats and cables were simple repairs.”

Improving the waterfall filter took longer. Without sufficient pressure, the automatic spray bar on the back of the screen stopped moving up and down. As the wedgewire clogged, influent ran off and filled the hopper. “The filter’s stainless steel walls bulged a little, allowing the air seals along them to leak,” says Schwartz. “Working with ClearBlu, we installed stainless steel turnbuckles and pulled the walls back in line. This greatly improved the pressure and nozzle action.” They also replaced the seals with more robust rotating units.

The maintenance staff also noticed some dispersed bacteria that wouldn’t clump and drop out. “That was interesting,” says Schwartz. “We played with the microbiology and increased oxygen levels until the problem cured itself.” They eventually added eight more aerators to Cell 1 and four more to Cell 2, for a total of 30 units. The first cell lowered BOD from 4,000 or 5,000 mg/L to 1,200 mg/L. Cell 2 reduced it further.

The brewery met its discharge limits in summer 2014, but cooler weather brought a slight increase in numbers that puzzled the staff. Schwartz believed some microorganisms were slipping through. “We had 300 to 400 mg/L TSS entering the lagoon and solids as high as 600 mg/L passing through the flume,” he says.

The source could be a small area at the end of Cell 2 with no aeration. “We’re definitely growing a lot of bugs and they’re doing a great job,” says Schwartz. “Currently, we’re discharging 150 to 400 mg/L BOD.” The brewery will consider adding a clarifier at the back of the treatment train to stabilize discharge and meet limits.

The pretreatment system requires weekly maintenance such as cleaning the screens, emptying and rotating the hoppers and topping up caustic and microbe levels. Twice daily, staff members pump the cone-bottom tank for five minutes, sending a total of 80 gallons of dense sludge to a diversion tank.

“The lab measures TSS, dissolved oxygen and chemical oxygen demand and checks pH,” says Schwartz. “Fortunately, the pretreatment system is fairly hands-off, because we’re brewers, not wastewater operators. That was the most challenging aspect of running the system.” 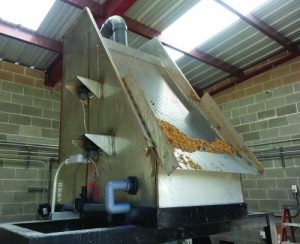